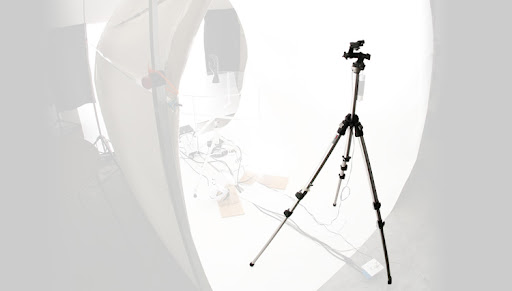 Tripods don’t get enough credit.  They’re awesome, but they almost never get noticed unless something on them breaks.  Hopefully I can change that, and make you want to give your tripod a nice pat on head.

But there’s no way around it, you need a tripod if you want to make awesome 360º views of some products.

You may be able to get away without a tripod if you have a solid object to set your camera on, but a tripod makes life a lot easier.  Basic, entry-level tripods start at around $5 on eBay.  These kinds of cheap tripods are small and are more suitable for lightweight compact cameras (rather than a heavy DSLR camera).

There are a lot of brands to choose from when it comes to tripods.  Sadly, I’m not a total tripod-guru.  I got lucky because I was given a rock-solid tripod by a good friend.  It works well, so I haven’t needed to research much more about tripods since then.  The one I use is a discontinued Manfroto Tripod (worth about $100 without the head) that I can still find spare parts for on the web.

For the tripod head, I use a Manfroto 056 3-D Head (costs about $50).  I didn’t like how there wasn’t a quick-release for this head, so I bought a quick-release clamp from reallyrightstuff.com, which just happens to be located in the same town I live in, San Luis Obispo, California.  The model I got is called “B2-FAB 38mm clamp w/threaded socket”, and it set me back about $60.  I normally wouldn’t drop that much on a quick-release clamp, but I’ve met the owner, Joe Johnson, who’s a good guy and I’m happy to give him my business.

Tripods can get fancy and expensive real quick.  There’s a lot of really great tripod systems out there.  For 360º product photography, it would be pretty awesome to use a high-end tripod with a 3-axis ball head.  Ball heads are really fun to play with, and I strongly recommend you get one with a built-in level so you can make sure the camera is not taking pictures at a tilted angle (that sucks!).  Really right stuff is like the Ferrari of tripod heads. Manfroto is pretty darn good too, and they’re a little bit cheaper while still offering top-notch products.  I wish I could tell you more about high-end tripods, but it’s really not my area because a simple $200 tripod set-up seems to get the job done when making 360º product images.

Got your own favorite tripod? Need more help picking the right one? Leave a comment and I’ll do my best to give you a personal recommendation!

Getting started is easy

If you can copy & paste then you’ll love using Imajize! Create a free account with our one step signup process. Between our library of support materials and relentless customer support you will be a 360 spin ninja in no time.

Here is what you get